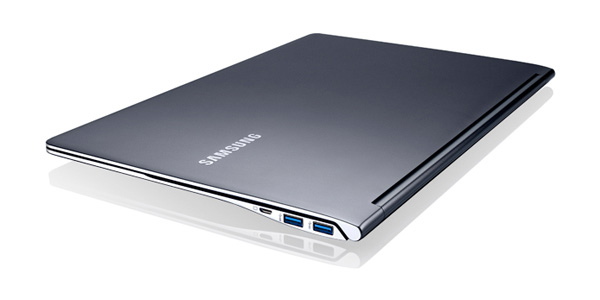 The Samsung NP900X4C is a ultra slim laptop with quite nice specifications. This post is about running Fedora 17 x86_64 on this laptop.

Event though the specifications for this laptop is all over the net, here is a short list with the basics:
The number of connectors on this laptop is quite small due to its slim design, but at least you get the following:

The SSD and memory are "easily" upgradable on this laptop. The back cover is attached with ten small screws and with some plastic snap hooks. The screws are easy to remove with some gentle force (they are loctited) if you have a proper screwdriver. If not, you could easily damage them.

After removing the screws, you have to snap the back cover lose from the plastic hooks and this requires some very gentle force to not damage anything.

Once the cover is removed you can see the memory and SSD disk: 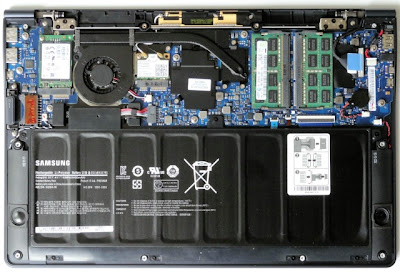 You can replace the 2x4GB SODIMM:s with 2x8GB SODIMM:s to get 16GB of RAM and replace the stock 128GB SSD with a 256GB SSD from Crucial to get more storage space. There is an instruction note on the battery that says that the battery should be disconnected before swapping SODIMM:s Just to be sure, I followed this instruction.

The laptop works just fine after the memory and drive upgrade but it could be that your warranty is void. Samsung says that 8GB RAM is maximum. Upgrade on your own risk.

I installed Fedora 17 x86_64 fresh on the new 256GB SSD from a USB DVD-reader. I have no interest in Windows so I didn't bother trying to copy the content of the stock disk to the new one.

The laptop was connected to the net via the ethernet dongle so that I could get all the updates directly during the installation (by choosing to add additional repositories during installation). Wireless is not supported in the kernel that comes with the installation DVD, but is supported when all updates are installed. The installation was problem free.

The list below on what works and not assumes that you have a fully updated Fedora 17. Just installing from the install DVD is not enough!


Works, doesn't work and not tested

Here is a list of what works and not on a fully updated Fedora 17:

What is missing is some program that listens on the Fn+F9 and Fn+F10 keys and decreases or increases the brightness by writing to the above device node. Not sure whether such a program should be in KDE/Gnome or live somewhere under the hood.

It is possible to turn the radios for WLAN and Bluetooth on and off from within the OS. This is done by writing to specific device nodes under /sys (like in the case for keyboard backlit).

If you turn off both WLAN and Bluetooth, the blue LED on the F12 key will turn off to indicate that your laptop is in "flight mode".

As with the keyboard backlit, there is no program that listens on the Fn+F12 key event and writes to the device nodes above. So, when you press Fn+F12 nothing will happen.

The NP900X4C has three "performance" levels, "silent", "normal" and "overclock" (or "speed"). As far as I understand they basically control the CPU frequency.

As with keyboard backlit and radio on/off, pressing the performance key (Fn+F11) key doesn't do anything.

Battery life extender is a function that can be activated in BIOS or from within the OS. It extends the lifetime of the battery by only charge it to 80% instead of 100%.

To activate/deactivate, just write the appropriate value to the device node:
where STATE is 0 for deactivate or 1 to activate.

USB charge is a function that can be activated from BIOS or from within the OS. When activated, it allows you to charge your cellphone or other stuff from the USB2-port even when the laptop is switched off.

To check if the USB charge function is activated, look at the value in the usb_charge device node:
0 means that the function is deactivated and 1 means activated.

To activate/deactivate, just write the appropriate value to the device node:
where STATE is 0 for deactivate or 1 to activate.

Some documentation about performance level, battery life extender and USB charge can be fond here.

Some of the function keys does not have any mappings meaning that even if you press them, Linux will not recognise that. The function keys in question are:
You can verify that nothing is happening by starting xev from the command prompt, move the mouse pointer to be within the black square in the window that pops up and then press different keys. You will see output in the terminal when you press "known" keys, but if you press any of the Fn-keys above nothing will happen.

To make Linux recognise these buttons you need to create two files and add two lines in two other files.

To begin with, create the file /lib/udev/keymaps/samsung-900x4c with the following content:

Second, create the file /lib/udev/keymaps/force-release/samsung-900x4c with the following content:

Third, add the following line to the file /lib/udev/rules.d/95-keymap.rules:
The line should be added at the bottom of the block of lines that begin with:

Fourth, add the following line to the file /lib/udev/rules.d/95-keyboard-force-release.rules:
The line should be added below the block of lines that begin with:

The steps above will tell Linux to load the two mapping files if the value of the device node /sys/devices/virtual/dmi/id/product_name matches the regexp "900X3C*". Even though this is a 900X4C, the product_name node contains the string "900X3C/900X4C/900X4D" indicating that all these three laptops are about the same when it comes to Linux support.

You have to reboot for the new configuration to take effect. Once up and running again, start xev on the command line and observe that things now happen when any of these five function keys are pressed. But, since there still are no program listening on these events and poking on all of the device nodes discussed above, you will not be able to use the function keys until you write some software/scripts that handles that.

The Samsung NP900X4C is a really nice laptop to running Linux on. It performs very well for doing "internet stuff", writing and development jobs. The hardware support "out of the box" is very good for such a new laptop. 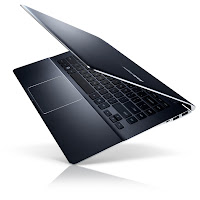 The laptop stays very cool during normal use and the fan hardly have to work. This will of course change if you do heavy compilations and stuff but that is expected.

The finish is also top notch and the laptop looks really sleek and is easy to carry with you. The combination of 15" screen and 1600x900 resolution is also a very good match and looking at the screen feels "natural". Viewing angle is unfortunately a bit narrow but considering everything else, I think it is acceptable.

The battery seem to last for at least four-five hours when just surfing/writing with the screen on all the time.

Do I need to add that I'm quite satisfied with this laptop :-)
Posted by Johan Hedin at Sunday, October 14, 2012